Two months ago I’ve decided to buy a drone so that I would be able to make some amazing shots in Norway, where I’m on Erasmus+ student exchange. Even though I’ve done extensive research, I got surprised by quite a few things. Let’s go through them together - from the basic ones to the advanced ones.

There are many different drones with different resolutions, roughly in categories:

You might be tempted to think that 4K is overkill - for example because you only use 1080p or 1.4K monitor. Nevertheless, to operate a drone safely you need to have some distance between the drone and what it’s capturing - having better resolution and the ability to crop afterwards would be very useful.

As for the gimbal (the thing that keeps the camera stable), I’m sure it’s important, but I’m not able to give any comparison.

One more thing to check for is what Field of View (FOV) the camera has. It’s in degrees, and the lower the number, the more zoomed in the picture will look. If the number would be up to 180° it would look like fish-eye lenses from GoPro cameras.

Different countries have different rules. The lowest category in the EU is under 250g and that’s the category with the easiest way to get a certification. In Czechia it’s free, in Norway it’s not, but they do recognize certifications from the EU.

Note that if you’re flying anything with a camera in Norway, you have to be a registered drone operator.

The drone is controlled via a physical remote control, which has both antennas and control sticks. It can also connect via cable to a phone to show the live view from the camera.

Note that due to some embargos on DJI (Chinese company), the DJI Go fly app is not in Google Play and needs to be sideloaded, with all the safety concerns that brings.

The remote control has brackets to hold the phone, but beware that it can scratch the screen or roll away the edges of the screen protector.

I certainly do like to fly the drone by hand. That being said, for longer paths the ability to plan a route beforehand and then press execute and solely focus on the safety of you, the drone and everyone around is paramount for me. Unfortunatelly, not all drones offer capability to execute preplanned paths.

For a lot of DJI drones, there are different applications that can be used to plan routes and then execute them. Though there is a significant difference between applications for the cheaper and lighter drones (like DJI Mini) and the more professional drones.

For the cheaper drones, the DJI company offers developer access only to so-called Virtual Sticks - using these, the drone is controlled by an app from a phone. The alternative for the more professional drones is Waypoints, which you upload to a drone and the drone flies itself.

What’s the practical difference? If you’re using app control via Virtual Sticks and the connection to drones stutters, the drone will stop in place. That looks rather disrupting in a drone video.

You might think that wind is probably gonna be fine - the drone has powerful motors, and it’s able to stabilize itself. Yes, but only to some degree. The official specs say the maximum wind resistance is 8 m/s (28 km/h, moderate breeze), which according to Wiki “raises dust and loose paper; small branches moved”.

High above the ground, the wind is able to sway the drone from side to side and while it doesn’t look great on video, it’s manageable (until it suddenly isn’t). The problem comes, when you want to make some “cool” video from up close. I’ve nearly crashed the drone into a roof when the wind swayed it a few meters down. So if you want to fly close to something, do it when there is no wind.

For the lowest category of drones, you can legally fly them only when you have VLOS (Visual Line of Sight). So even when the specs say that under ideal circumstances the EU (CE) version DJI Mini 1 can be remote controlled up to 2 000 m away, that’s not legally achievable for me - I have to be able to see the drone at any point. I’ve tested it and when the drone is against a contrasting background (the partially cloudy sky is great) and I know precisely where it is I can follow it to a distance of roughly 500 meters. On the other hand, if there are for example trees behind it, I can barely see it on 150 meters and can never look away, or I’ll lose it.

I’ve ordered some small strobe lights in the hope that they will allow me to see it from further away.

As I’ve already mentioned, the distance between the operator and the drone is limited not only by VLOS, but also by the capability of the radio. DJI Mini is controlled over radio signals in the WiFi ranges (2.4 GHz and 5 GHz). That means that in the city the range is significantly shorter due to the interference from other WiFis.

Note that there are different variants of DJI Mini 1 - for example US one (FCC) and EU one (CE). The letters in brackets signify what certification / legislative limits it follows and therefore it also affects the distance over which you can control the drone.

No flying at night#

Flying at night is legislatively problematic. In Norway, it’s essentially impossible for me. In Czechia I think it might be doable with the correct set of strobe lights, but I’ll have to check that when I come back. But from what I’ve seen on YT, the camera is not great in low light, so it might not be even worth it to buy the night lights.

DJI offers drone insurance for when you crash the drone or lose it. It’s noteworthy that as far as I can tell, it’s not compliant with EU Regulation (EC) No 785/2004, therefore it is not a specialized Drone Operators Insurance. That might not be important in Czechia, where you don’t have to have any insurance for the lightweight drones, but Norway does require it.

As it’s not required in Czechia, the Czech insurance companies don’t generally have quotes for individuals, only companies. I’ve managed to get a quote of over 8 000 CZK, which is roughly the same price as the drone itself.

I’ve finally got insurance from CoverDrone, which offers drone operator insurance - both for liability and for damage to the drone itself.

Also note that if you have general-purpose liability insurance, it might exclude drones in the fine print.

There are some places, for example around airports and prisons, where you can’t fly with a drone. DJI has a map, that works great until it doesn’t. I’ve specifically checked there whether it’s possible to fly in Trondheim - it appeared to be doable. 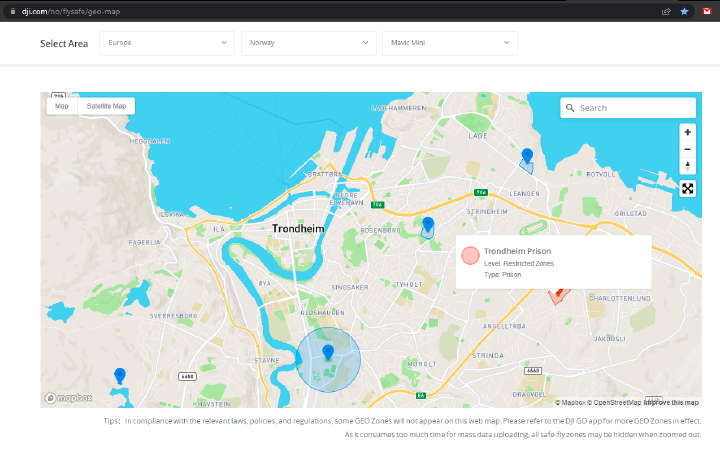 Except it isn’t - if you scroll down more on that page, you can enable warning zones. One of them is St. Olav’s hospital’s helipad, to which I can’t approach closer than 3 km. That sadly forbids most of the interesting things in the city centre and on campus.

And all of a sudden Trondheim is forbidden land.

(A map for Trondheim from a different provider shows it correctly).

It might be tempting to think that buying a drone is a one time deal. Sadly there are quite a few hidden costs, some of which I didn’t expect beforehand.

And I’m sure sooner or later I will crash and at that point the costs will go through the roof.

If I knew all this in the beginning, would I buy the drone? No, I wouldn’t. While it’s great to have aerial photos with much greater resolution than a satellite view gives, I don’t have enough use-cases for it. I find flying with it by hand very exhilarating, but also extremely stressful as it’s easy to crash into a tree and never be able to recover the drone.

And with all the legal requirements, it’s frustrating not being able to use the drone in some places. Some of the results look incredible, like the following panorama from someone in Slovakia, though it’s self-incriminating as it’s clearly shot from a height above 120 meters, which is the legal limit. And there are also people more dedicated and with better equipment than me, who already produce incredible videos from Czech nature.